The Appaloosa has been around for a really long time.

As the story goes, the Nez Perce peoples of the American west created this interesting breed. They had lived in the areas of what is present day Oregon, Washington, and parts of Idaho.

But before we get into that, we have to go even further back in time.

“Leopard complex” spotting had been seen in horses all throughout Western Europe for centuries. The leopard complex spotting can be seen not only in the Appaloosa, but in the Knabstrupper, and Noriker horse.

We can attribute many early horses of the US to Christopher Columbus, Hernan Cortes, and Hernando De Soto, during their conquest and exploration of North America; Many if not all of American horses derive from those left behind on these expeditions. Afterall, you can’t explore new terrain without a horse, and it’s not like they would sail all the way across the ocean just to say, ” Ah, we made it. Now, let’s go back!”

They totally did some sightseeing and left all kinds of stuff behind on their way out. Which had good and bad effects on the Natives.

The one great effect it had on the Native Americans was of course, the horse. Many tribes took huge advantage to capturing the new residents. It is said that the large Shoshone Tribe which had a vast territory, would often more than dabble in the art of trade and furnished many North American Tribes with these horses. It was around 1750 when basically every tribe had received horses, which meant the Shoshone had ran out of customers.

The Nez Perce in particular became really fond of their new equestrian friends and became deeply involved with breeding efforts. They were unique in the sense that they were super selective in deciding which horses mated and which ones didn’t. They often gelded the inferior stallions and traded off poorer stock. As a result of the Nez Perce’s breeding efforts, they had incredibly superior horses compared to almost all of the other tribes in North America.

They lived near The Palouse River in the American West. Palouse is a Native American term for “Something sticking down in the water.” (Like horses do when they drink.) As we know in American history, many Native terms were applied by early white settlers to our nation’s rivers, mountains and more. So when these early whites came across the Palouse region and observed their magnificent horses, they became known as the Apalousey horse which then, later on became the Appoloosa.

The Nez Perce lost much of their Appaloosa stock during the war of 1877. They had created a very swift and intelligent breed which allowed many to escape the white’s hasty “round-up’s.”

The captured horses were sold off to cattlemen. As for their counterparts, The Nez Perce that remained on the newly founded reservations were able to keep a limited number of Appaloosa however if they were inclined to breed, they were forced to breed with only Quarter Horses. The Appaloosa was quickly becoming a lost breed.

It wasn’t until the 1930’s that a resurgence in breeding efforts began. The Appaloosa Horse Club was created in 1938 and still exists today. It’s actually an incredible organization that aims not only to maintain breed but also to educate youth as well.

As a result of the Appaloosa’s varied breeding history, the Appaloosa today can range in physical appearance from stocky, more warm-blooded-like to sleek and racey. They typically range from 14.2 to 15.3 hands and have the signature leopard complex spotting. 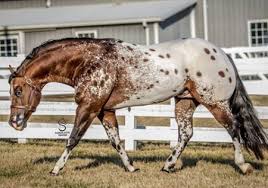 The Appaloosa is a very strong horse that weighs anywhere between 800 to 1,000 lbs. Appaloosa’s are used for stock work, show and even show jumping.

The Appaloosa has also paid it forward in helping the Nez Perce today. Breeding efforts went underway in 1994 in an attempt to make a Nez Perce Horse breed. The modern-day Nez Perce use the Appaloosa in these breeding attempts along with the Akhal-Teke of Central Asia. The Nez Perce today feel very strongly about restoring their strong breeding culture and tradition. They were able to obtain horses of direct lineage from Chief Joseph’s stock which had been kept pure on a ranch in Wallowa Valley. For more information on these efforts, click here.