A lonely elderly woman awoke in the middle of the night. It was a silent, dark night in the city. She is used to living alone. Her husband had died many years ago. She has owned this house for decades. Knowing every creaky step and every random sound her house may bring.

As routine as a flower blooms in springtime; the elderly woman awakes. Walking into her bathroom as she does every night and at the same hour. However, as routine as her thoughts are at this time, she is completely unaware of what is about to happen. The following event will stay in her memory permanently.

Unknown to her, a large black cat sits atop her folded towels in the linen closet of her bathroom. The cat had chosen this woman, her house, and this night in particular. For it was the night the cat had chosen to appear.

Several months prior to this night, the cat would hide in the shadows of the neighborhood. It would go about the street in the darkness unnoticed. Seeming to be just  another neighborhood stray however this cat was not.

The black cat would slowly creep along the sidewalks and bushes. Listening to the prayers of all who slept. Hearing what would be silence to most, the cat could hear clearly. Not only could this cat hear your silent prayers, but it also looked into your dreams. With a quick jump onto your window sill and glance into your window, as you slept comfortably into your bed. Every vision that came across your dreamscape, the cat could see.

The cat has no name, no age or origin. These elements are not important. What is important is that she succeed in achieving her purpose. It is amazingly strong, able to open and close doors and climb screens of windows. Her prowess is superior. Hunting skills honed. She is as silent as she is deadly. Whoever becomes her target is an unfortunate soul indeed. Although the cat has a softer side and finds the kindness in her heart enough to always ensures a quick and painless death for her victims.

Many times she has crept into a house. Opening a closed window or door. Silent and swift, lightly strolling across a floor to make her way to the bed. As she jumps, the air underneath her feet, lift her above the bed. As she leans in closely to identify the soul of her victim one last time. She places a paw on the face and whispers, ” I have heard your prayers in the middle of the night and seen what you long for, in your dreams. I have come to take you to the place you wish to be.” And in one quick breath, the cat and her victim disappear forever, from the once comfortable bed.

The old woman was no stranger to death. She had lost her only son at a very young age. Sickly and ill with a rare disease, she would care for him day and night. Crying and pleading with the universe to change her young boys fate. But to no avail.

Her husband too had passed. A once joyous and insatiable flame, snuffed out by the dark. A man she had loved so truly and deeply. Who again found fate, one icy winters night on the road. She would weep every night since.

Every night the woman would climb into bed. Sit up and recite her silent prayer. And as she slept, she would dream.

As the cat lay perched upon her folded towels, in her linen closet of her bathroom. She waited. As the lonely old lady finished the wash of her hands, she reached for her towel and walked back to her bed.

She fell asleep once again.

The cat came coolly strolling over. Across the floor and into her bedroom. As she jumped, the air underneath her feet, rose her high above the bed. The cat leaned towards the old lady as she slept. Put a paw on her face and said, ” I have heard your prayers in the middle of the night and seen what you long for, in your dreams. I have come to take you to the place you wish to be.”

In the morning the woman woke. At her feet lay a black cat. A seemingly rough-looking cat, but quite loving. The cat stayed with the woman for the rest of her days. Providing her the love and companionship that she had once prayed.

By day the bat is cousin to the mouse.

He likes the attic of an aging house.

His fingers make a hat about his head.

His pulse beat is so slow we think him dead. 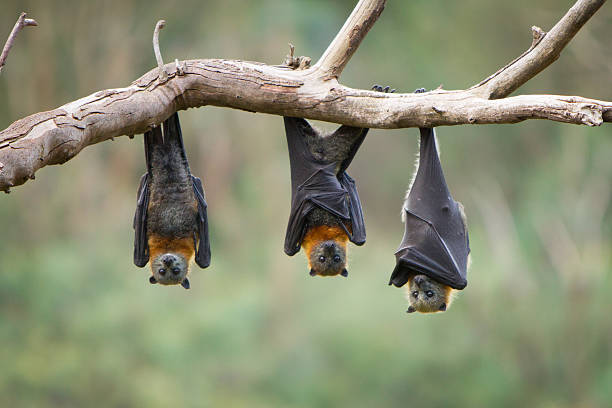 He loops in crazy figures half the night

Among the trees that face the corner light.

But when he brushes up against a screen,

We are afraid of what what our eyes have seen:

For something is amiss or out of place

When mice with wings can wear a human face.

-by Theodore Roethke, from the book The Haunted House and Other Spooky Poems and Tales by Gladys Schwarcz and Vic Cume

The Great Auk’s ghost rose on one leg, Sighed thrice and three times winkt, And turned and poached a phantom egg And muttered, “I’m extinct.”

The Great Auk was once a flourishing species that could be found off many North Atlantic coastlines. Once used heavily as bait for commercial fishing, the Great Auk became classified as extinct in 1844.

For more information, click the link here to the Audubon Society and also the Smithsonian Magazine.

For even cooler information, check out this article in the Daily Mail and see what efforts are being explored to bring this species back.

– poem by: Ralph Hodgson from the book The Haunted House and Other Spooky Poems and Tales by Gladys Schwarcz and Vic Crume

Said the shark to the Flying Fish over the phone: “Will you join me tonight? I am dining alone. Let me order a nice little dinner for two! And come as you are, in your shimmering blue.”

Said the Flying Fish: “Fancy remembering me, And the dress I wore at Porpoises’ tea!”

“How could I forget?” said the Shark in his guile: “I expect you at eight!” and rang off with a smile.

She has powdered her nose; she has put on her things; She is off with one flap of her luminous wings. O little one, lovely, light-hearted and vain. The Moon will not shine on your beauty again!

-by E.V. Rieu, taken from the book The Haunted House and Other Spooky Poems and Tales by Gladys Schwarcz and Vic Crume.

Legend of the Brule Sioux tribe:

In days long past, when the earth and the people on it were still young, all crows were white as snow. In those ancient times the people had neither horses nor firearms nor weapons of iron. Yet they depended upon the buffalo hunt to give them enough food to survive. Hunting the big buffalo on foot with stone-tipped weapons was hard, uncertain, and dangerous.

The crows made things even more difficult for the hunters, because they were friends of the buffalo. Soaring high above the prairie, they could see everything that was going on. Whenever they spied hunters approaching a buffalo herd, they flew to their friends and, perching between their horns, warned them: “Caw, caw, caw, cousins, hunters are coming. They are creeping up through that gully over there. They are coming up behind that hill. Watch out! Caw, caw, caw!” Hearing this, the buffalo would stampede, and the people starved.

The people held a council to decide what to do. Now, among the crows was a huge one, twice as big as all the others. This crow was their leader. One wise old chief got up and made this suggestion: “We must capture the big white crow,” he said, “and teach him a lesson. It’s either that or go hungry.” He brought out a large buffalo skin, with the head and horns still attached. He put it on the back of a young brave, saying: “Nephew, sneak among the buffalo. They will think you are one of them, and you can capture the big white crow.”

Disguised as a buffalo, the young man crept among the herd as if he were grazing. The big, shaggy beasts paid him no attention. Then the hunters marched out from their camp after him, their bows at the ready. As they approached the herd, the crows came flying, as usual, warning the buffalo: “Caw, caw, caw, cousins, the hunters are coming to kill you. Watch out for their arrows. Caw, Caw, Caw!” and as usual, all the buffalo stampeded off and away- all, that is, except the young hunter in disguise under his shaggy skin, who pretended to go on grazing as before.

Then the big white crow came gliding down, perched on the hunter’s shoulders, and flapping his wings, said: “Caw, caw, caw, brother, are you deaf? The hunters are close by, just over the hill. Save yourself!” But the young brave reached out from under the buffalo skin and grabbed the crow by the legs. With a rawhide string he tied the big bird’s feet and fastened the other end to a stone. No matter how the crow struggled, he could not escape.

Again the people st in council. “What shall we do with this big, bad crow, who has made us go hungry again and again?”

“I’ll burn him up!” answered one angry hunter, and before anybody could stop him, he yanked the crow from the hands of his captor and thrust it into the council fire, string, stone and all. “This will teach you,” he said.

Of course, the string that held the stone burned through almost at once, and the big crow managed to fly out of the fire. But he was badly singed, and some of his feathers were charred. Though he was still big, he was no longer white. “Caw, caw, caw” he cried, flying away as quickly as he could, “I’ll never do it again; I’ll stop warning the buffalo, and so will all the Crow nation. I promise! Caw, caw, caw.”

Thus the crow escaped. But ever since, all crows have been black.