In the 1800’s, Pugs were bred with English Bulldogs to create, what was then called a “Toy Bulldog.” However these Toy Bulldogs quickly grew out of favor and by 1860, many were exported to France, primarily by traders and skilled craftsmen (lacemakers) who were relocating to France.

In France, the dogs were cross-bred with various other, unidentified small breeds, and quickly became popular among women. In Paris, these new dogs were so adept at city living, and easy to care for, that their popularity grew even more so. The French Bulldog had finally left its “ratting” (hunting of small game such as rats) and became a beloved companion animal.

Their ears are a distinct feature which separates them from other bully-breeds. French Bulldogs can weigh up to 30 lbs and can live up to 12 years.

Similar to the Great Dane, Afghan Hound, Sealyham Terrier and others; Frenchies are hard to find. So be prepared to wait on a breeders list for a while. However hard to get ahold of, once you do- a French Bulldog will prove to be a worthy guard dog, affectionate companion, well-behaved, alert and active but not overly playful. Frenchies don’t require a lot of exercise and adapt well to any living environment.

Being a brachiocephalyc breed, French Bulldogs have a hard time in the heat. This is because, even though they have short hair- their muzzles are not long enough to cool the air as it passes through the airway, as it would in longer muzzled dogs like German Sheperds or Dobermans. Therefore limiting your Frenchies exposure to heat and being aware of any signs of heat stroke when outdoors for long periods of time, are one of the responsibilities of a Frenchie owner.

At the same time, French Bulldogs are not very tolerant of cold weather either; due to their short hair and smaller stature. However there are plenty of dog shirts and jackets available to prevent your dog from getting cold.

Overall, French Bulldogs are typically fantastic with all people and other animals. Although they do have some trouble being alone due to their want to be with their people. They are not a loud breed and will not bay, howl, or bark a lot like many hounds would. So if you’re looking for a friend to spend time on the couch with or to take a quick stroll with on a nice day, this is the dog for you. 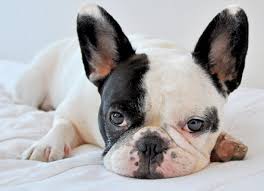 GOOD LUCK ON YOUR PUPPY SEARCH TAMMY! May you find the perfect Frenchie for you and Nicky!